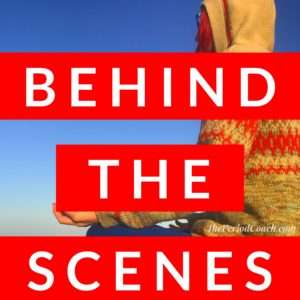 I had a coaching session earlier that week with Tash Corbin who said, it’s time for the book. Make a Kickstarter. I had to start putting the book together, in order to explain it on Kickstarter.

I wrote out my bullet points by hand. Every topic I wished I could dive in deeper on, things that come up again and again in my FB group, or on podcast interviews – I’ve been on a lot of them over the years. Questions people send me in private, and news that’s not getting enough light…   Then I culled by answering these questions:

That bulleted list became the chapters, and topics. I filled in the blanks and made a digital copy I could build on.

At this point I also looked at the Kickstarter. What would I need to figure out? I was surprised by all the little bits that I needed to research and put together. Like how much will shipping a book – that I have no idea how much it weighs or what size it will be – cost? What will it cost internationally? I’m gonna be honest here, I still don’t know, I looked at other Kickstarters and basically split the difference. Some people had shipping I knew wasn’t enough based on shipping Yoni Eggs to Australia. Some were really high, and hey they might be right, or they might be promising first class overnight delivery. ( I am not! ) I’ll know more about this next month when I do my shipping.

So I created the Kickstarter page in tandem with molding the structure of the book. It actually was a really helpful process for writing the book, I just wished I’d given myself an extra month or two.

But I had to launch (and end) before the holidays. I really wanted to have it closed before Thanksgiving, but I just didn’t swing that and it’s close date was the day after. That said, the goal was met on Thanksgiving 🎉

have champagne when the Kickstarter hit it’s goal, she donated the remaining $200 needed, looked at me and said, so we can drink

now?😂🥂Kisha, you are a rockstar, THANK YOU!

I could not have pulled off the Kickstarter without the help of a circle of women. I had a FB group dedicated to just people who wanted to help me reach my goal. I posted something in there every day that they could share with their communities to help spread the word. I posted links to my posts that had good traction to get more engagement on them. I asked for more help in the month this Kickstart was live than probably the rest of my life combined.

That alone, was really good for me. I’m not an ask for help person so this was a huge stretch. I asked everyone if I could come on their social media live, do interviews, guest teach, anything I could to spread the word.

I spent that 30 days in constant hustle mode. I’m not a big fan of hustle. I mean yes, there’s the get shit done phase of your cycle, and there’s the tie up loose ends phase, but there’s the rest and recenter phases and those got skipped.

Next time for Kickstarter: 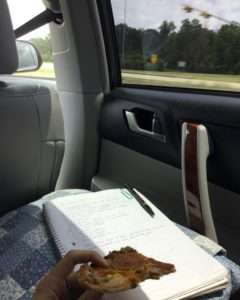 This book started out hand written. I think better by hand. I’d venture to guess most people do. So I wrote out some of the things I knew needed to be said. Paragraphs and topics that needed to be addressed. This whole notebook is broken up by chapter, post-it tabs all the way down the outside. It worked really well for me. I labeled it Book #1. Genius. Truely.

I started delivering the Kickstarter gifts that I could. Adding people to groups, who got really good deals on two of my programs. And writing the book. I was really on a roll there in December and January. I got through Chapter 6, of 13, in very rough draft form. I left LA for 6 months of travelling on March 5th. A LOT of drama happened the two weeks before I left. Then there was two weeks of VERY intense work. Back to back conferences on different ends of the globe.

So there wasn’t a lot of progress made. And to be honest, not a ton of progress was made while I was in Australia for 3 months. I was moving constantly, the longest I spent in one spot was 6 days. That only happened 3 times in 3 months. Mostly I was moving every 2-3 days.

I think I made it to Chapter 9 in those three months. But Bali was my catch up in a BIG way! 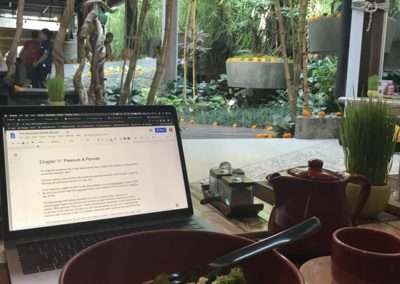 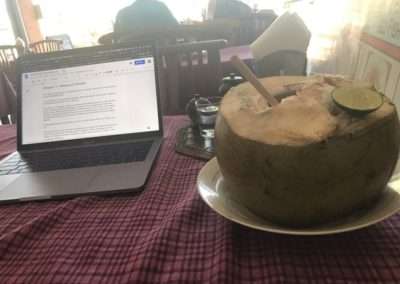 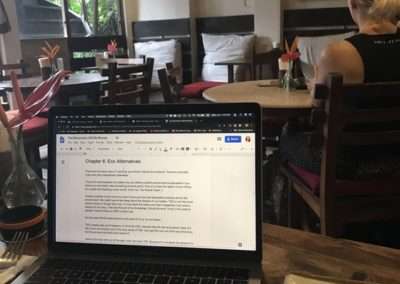 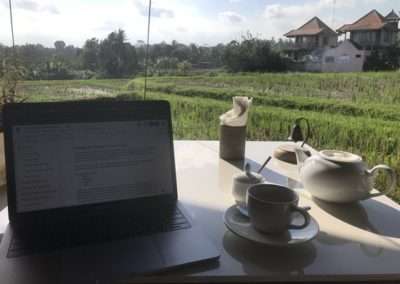 I found myself in rice paddies drinking tea, having 3 hour long writing lunches. I found different cafés that I could sit at for hours, snacking, drinking, and writing.

I plowed through writing the rest of the first draft by June 26th. Then I set about re-reading and editing. Which I did, twice through in the next month. Right before my birthday. Then I brought in Tanja, editor extraordinaire! Holy everything, what this woman did for the next 3 months. I mean, let’s just say I thought I was working hard before. I handed her 57,718 words.

We went through the book 3 more times. The first time she did a massive overhaul of the book. Reordering chapters, and restructuring the content. It’s SO much better, it forced me to get really clear. She shifted to how I present this content. This book is my side of a debate. A debate I have every intention of winning.

After the first round of editing the book was up to 69,771 words

The last round Mom and I shared my computer to make sure a third set of eyes went through this book. And brought the total up to 76,023.

So yeah there was a lot of writing in the editing process. Tanja tells me that’s good, if we were cutting that much it would have meant I spent a lot of time writing… excess… aka crap/side tangents. I know once it’s printed, despite all this, I’ll see errors. I will learn to live with them, until the second edition!

Tanja and I finished our final wrap call at midnight where I was. She warned me that I’d feel lost the next day, and I had spoken to my mom about that already. Musing that I wouldn’t know what to do with myself after spending every spare moment for months reading through this book. Walls and walls of text for days on end. But I have a very long to-do list, and I started working on it the very next day.

I woke up that very next day after almost 9 hours of sleep, SO SORE. I mean I felt like I’d gotten beat up, or hit by a truck, or ran an ironman. I was deeply fatigued. I took a slow morning, but I had clients, and I needed to get a few odds and ends to Tanja. I also needed to create the copy for the back cover of the book, which I did have Tanja’s help for thankfully.

Now I’m in the process of:

I’m actually having fun with this bit! Karen Birkemoe is designing the cover, and Maureen of GoPublished is designing the interior. I’m loving that I was able to pay three women, that’s a big portion of the money from the Kickstarter.

Speaking of which, I’ll do a breakdown of the Kickstarter when it’s all done and spent. I’m sending out updates on costs to the Kickstarter backers as I spend. So far I’ve spent half on editing. Hopefully the rest will cover Karen and Maureen, printing, shipping, and gifts. We’ll see!

Here’s the stats so far:

Was this helpful for you? Did you learn anything? Did you just enjoy seeing what it was like inside? Let me know!

This site uses Akismet to reduce spam. Learn how your comment data is processed.